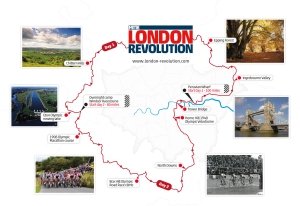 So normally I write reviews of interesting shows and events that I’ve cycled to – good, arty stuff, to which the cycling is merely incidental… but, hold on to your brake-blocks, it’s the cycling that takes centre stage for this one. Some time ago, my favourite cycling blog, London Cyclist, suggested that we should book fast for this event, as it would fill up fast. And so, several months later, to my astonishment, last weekend I took part in the MITIE London Revolution – an epic ride around the perimeter of the city, covering about 185 miles in two days. Those of you who know me know how much I love my cycling, but this was totally beyond anything before. Arriving at the start, I was somewhat nervous. Clearly I had the worst bike, was far too old, way too fat and seriously undertrained. Registration was nice and simple and rather perky for 6.30am; I was not perky, so I grabbed a coffee, checked in my bag and found myself on the start line. And, after some important briefing points, we were off. Lordy, what the hell had I done? But I was doing it: pedal-turn by pedal-turn, mile by mile, rest-stop by rest-stop, I worked my way around the course. Surprisingly soon, looking south, the Shard and Canary Wharf were mere pinpoints on the horizon; London passed us by in all its diverse glory, a millionaire’s mansion one minute, a Chicken Cottage the next. Rolling countryside suddenly gave way to Tudorbethan suburbia; look: a village post office, look: a closed down village pub. There’s a school fête, a local cricket match, a llama park, a skateboard park, a car park. Here are sheep and cattle, here’s yet more roadkill. Here’s an angry equestrian putting up angry handwritten signs railing against cyclists, here’s a bunch of kids on a hike cheering us on and reaching out for high-fives. All life was out there. Rest stops were welcome, water, flapjacks, strange energy gels and bananas, bananas, bananas. Two punctures, several crossings of the M25 and 104 miles later, with support of the enthusiastic chaperones, we arrived at Windsor Racecourse. 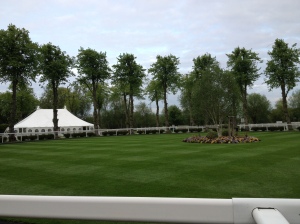 Lines of tents greeted us. Tents? Camping? Suffice to say a brand new sleeping bag will be on eBay shortly. There was yoga, music, warm showers, hearty food, a film screening and a bar: and at last I got a gasp from my fellow cyclists… not for my pedalling prowess, but for ordering a glass of rosé. Let’s not dwell on my night under canvas; I finally found my friend, the actor Nick Holder, over scrambled eggs. And Day 2 beckoned… Box Hill, sunshine, Biggin Hill, more sunshine, vaseline, the Herne Hill Velodrome, more vaseline, more punctures, London, Tower Bridge, Docklands, the end in sight, 86 miles. 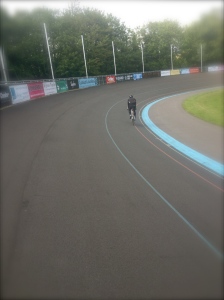 Like they say, I had no more to give and I was just a bit emotional as kindly folk applauded me across the finish line. I’m pleased I did it, I’m amazed I did it; so well organised and run throughout, medical bikes always there, helpful mechanics constantly on hand. I’ll definitely go for it again (camping may give way to the local Holiday Inn). Add on my cycle distance to and from the start/finish and it was 219 miles. For a slightly overweight, oversensitive and underprepared 47-year old who works in the arts, not bad at all, mate.