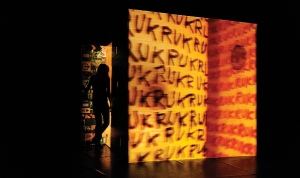 Ah, those teenage years. The angst, the anger, the emotions, the hormones. Ideally, what you should do is just shove those awkward, embarrassing years into a box, far out of sight. Which is pretty much what Teenage Riot does. Except they put a camera in the box with them, so the show is essentially a live stream of  teenage outpourings and agonies, with some comic live ‘animation’ and a lot of graffiti contained within the smallish enclosure. All the issues are duly in place: looks, weight, school, smoking, sex, sexuality, make-up, bullying and peer pressure. The teens pop out the box now and again to have a chat with us or stick a plastic bag on their heads, and some of the best moments are when they directly confront us about our age, our arrogance and how much closer to death we are than them. There’s a lot of wit and much clever use of the streaming device. Having seen many NT Connections plays over the years, it’s familiar territory, but the Belgian company Ontroerend Goed have a smart and unexpected way of presenting it. I haven’t been to the Unicorn since I was a teenager myself, so it’s pleasing to go there to see a piece about youth instead of being just work for a young audience. A touch more theatrical magic in the optimistic finale would have been great, but it’s a good and grungy reminder of why we mostly cringe when looking back at that part of our lives.