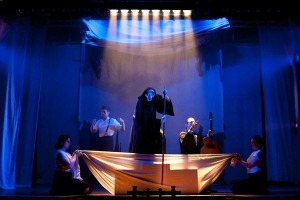 This is something of a theatrical curiosity. Upon entering the familiar Grand Hall of BAC, we find we have been whisked back to the 1930s, and are present at an unusual concert performance of the Orpheus myth, hosted by a Piaf-esqe chanteuse and featuring Django Reinhardt in the title role and on guitar. It’s a peculiar and intriguing premise, and the multi-skilled company dive into it with conviction. There’s energy and playfulness in abundance, but initially a little too much of the humour revolves around their studied amateurishness. There are knowing glances at the audience: we can’t quite do this dance step, we didn’t quite reach that note, we’re not very good at moving the scenery and our costumes are a bit rubbish. OK, we’ve got it… the characters are fuelled by enthusiasm rather than by skill. Except they’re not, as Little Bulb are actually incredibly skilful and when they fully immerse themselves in the story, music and characters, the production transforms into something rather beautiful. There are moments of joyous wit and silliness – Orpheus’ musical charming of the animals is a lot of fun, as is the gloriously cliched montage of a day in Paris. 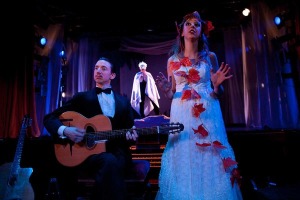 Then after an overextended interval, the second half is often staggering – the appearance of Cerberus and the ride across the Styx are genuinely unsettling, Persephone’s counter-tenor plea is deeply affecting and our hearts break when Euridice is dragged back to the underworld forever. The show makes great use of the bellowing pipes of the Grand Hall’s inbuilt organ and the music is a tour through many period styles, capturing the excitement that must have been felt at the arrival of the radical sounds of jazz. While Little Bulb are totally an ensemble, I was particularly enamoured of Eugénie Pastor’s performance as the eccentric French singer, somehow channelling bits of Joyce Grenfell, Ediths Piaf and Sitwell and Bette Davis, fully inhabiting her physicality, powerful in her vocals and desperate for us all to have a lovely time too – and apart from a couple of caveats, I did.