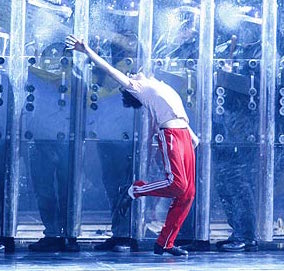 So I’d just cycled down the Strand, a street which often brings back a memory of my first Gay Pride March, c.1984, when, as a terrified teenager, I nervously held the hand of my then boyfriend to the disapproving stares of bystanders and looks of utter disgust from the police. It was the time of Thatcher battling the unions, de-nationalisation and the general selling off of public assets, and when ‘Coal not Dole’ stickers seemed to be plastered all over the country. Being a marching young gay was pretty smalltime in retrospect, but it felt huge at the time.

That memory stirred, I cycled on to Victoria and on a whim grabbed a ticket to the matinee of Billy Elliot: The Musical – now in its tenth year, but somehow it had eluded me. I’d sort of forgotten what it was about, so its harsh tale of economic struggle dividing a family in a small mining community and Billy’s realisation that ballet might just lift him out of it came as a revelation; not to mention the surprising subplot about a twelve-year-old boy’s passion for dressing up in his sister’s clothing. I think I’d always assumed that the stage adaptation would water-down the political context and sexuality issues, so I was genuinely awestruck to sit in a mainstream West End house and see such matters so explicitly played out: the joyous sight of a miniature figure of Death chasing Margaret Thatcher across the stage with his scythe, the police and the miners and the scabs in violent conflict on the picket line and two boys dancing exuberantly in drag, planting tentative kisses on each other’s cheeks. There’s also endlessly creative choreography, hugely imaginative staging and complex storytelling. The explicit language of the conflict is intact, along with the knob jokes, dodgy 80s knitwear and loads and loads of smoking. And a full West End matinee audience totally at ease with it all. Cheering it, in fact. Families, children, mums, dads, tourists. On their feet.

When I marched down the Strand all those years ago, I’m sure that in my head I dreamed of some utopian world where so much that I was starting to believe would one day be accepted. As I left the theatre I heard a dad casually explaining to his young daughter that when Billy kissed his best mate it ‘doesn’t mean he’s definitely a poof, he’s just not made his mind up yet’, and I sort felt my utopia had arrived. OK, not quite – we’ve still got a privatising government wilfully ignoring economic inequality, but I totally wanted to give that dad a big gay hug of thanks. If I’m truly honest, the show did feel a tiny bit tired at the matinee, but more than enough of its inventiveness and authenticity remain intact to bring a tear to the eye. Repeatedly. The stagecraft and the imagery are often breathtaking, summing up the period while remaining very modern. Peter Darling’s choreography is constantly brilliant, from Billy’s electric set pieces and the witty, exuberant finale to the more subtle, darker illustration of Gran’s ambiguous relationship with her husband. Economic, social and sexual politics aside, it all just make me want to dance. I cannot claim to have much in common with Billy’s life, but I certainly felt my younger self reaching out to me from the stage; like him, many a joyous hour was spent dancing up an electric storm in my bedroom. Still happens on a good day. So as Billy’s dancing took him up into the air, I was flying right beside him.

Ah, if only I’d gone to that Royal Ballet School audition that my parents wanted me to. That said, I’ve just googled “dance classes for the over-fifties” – maybe it’s not to late for my latent Billy Elliot to be released…

One thought on “Billy Elliot: The Musical”