I have to admit I’ve never harboured a particular passion for Irish-Czech fusion Folk Rock; in fact, apart from a slight nod in the direction of Frank Turner and the occasional encounter with a Ceilidh, I don’t really know much about that sort of music at all. So a couple of hours of it in a West End theatre pretending to be an Irish pub wouldn’t automatically be top of my list for an entertaining night out. But context is all. I’ve never seen the film that the musical Once is based on, and it seems to be a simple and deliberately slight piece of storytelling, a modern musing on the nature of love. A guy and a girl meet, that meeting changes their lives, it gets complicated, they are unable to speak what’s in their hearts, but they can sing and play. That’s it. It’s simple stuff, but that simplicity that gives the show an honest, unpretentious and extremely moving voice. The script is carefully crafted by Enda Walsh, almost a chamber piece in terms of its sparse dialogue, carefully weaving the songs into the narrative so that they advance the action, even if they’re not part of the plot. John Tiffany’s direction is carefully restrained, as is the understated set and lighting, and the performances are wonderfully subtle. The entire company play the music, moving and dancing with their instruments, using them to reflect their characters; under Martin Lowe’s fastidious musical direction, words, language, music and story all meld into a perfect whole. It’s certainly an oddity in the world of the Broadway musical and it’s rather interesting to see a traditional West End audience enjoying a rather contemporary piece of theatre. But most of all Once is about love and, despite being firmly rooted in the hard modern world, it asks that we put our cynicism aside and that we too fall in love with its protagonists. Easily done. From Zrinka Cvitešić’s almost angel-like arrival, we are easily won over by her wry wit, gentle beauty and pragmatic charisma, while Declan Bennett’s troubled, complex and vulnerable guitarist pulls at the heartstrings from his first note. 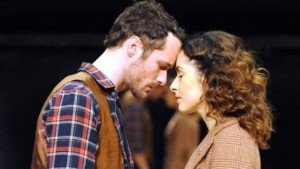 It risks being a little whimsical at times (saying ‘hello’ to a piano? Really? Is this Salad Days?), but sharply pulls us back to a real world where immigrants flip burgers and single mothers are exhausted. And if Once is about love, it’s certainly performed with love by a hugely committed, multi-skilled company who ensure that it always feels real and warm and truthful. My cynicism was banished. I felt for them, I cried with them and I desperately wanted them to find the words. And while it’s unlikely that I’ll rush into the warm embrace of Folk Rock at my local Irish pub, for two or so hours I was more than happy to visit that world, and have the opportunity to – yes – feel the love.