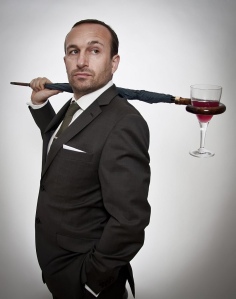 When I first began working in the festival-programming game, I remember a visit to see shows in Brighton and, after being chased down the street by someone dressed as an envelope and another dressed as a letter box, I was somewhat in despair at the quality of work on offer. Then the clouds of mediocrity parted as I came across a rather excellent, very well dressed juggler with a very fine line in witty patter, doing clever things with a tablecloth. Subsequently, I’m lucky enough to have booked the suave and debonair Mat Ricardo outside the National Theatre on several occasions. So it was an interesting prospect to see him indoors at long last. His monthly London Varieties at the Leicester Square Theatre treads an ingenious line between nostalgia (in format) and modernity (in content). The evening weaves together a motley bag of acts with a centrepiece, starry ‘in-converstaion’. The March lineup featured the contemporaneous angst of Elliot Mason, who voices the pain of a generation at industrial rebranding on a monumental scale, the biggest offender, of course, being the restyling of Jif to Cif. He also has great hair. Peter Wardell is a wry, cool debunker of magic, but of course he’s actually really good at it. The final act was The Boy with Tape on His Face, voluntarily silent and strangely anonymous behind his taped mouth, calling on punters to join him and lark about on stage in a lesson in skilful and generous audience participation. Mat himself juggles – he is a self-styled Gentleman Juggler after all – and taunts us with a bit of bowling ball danger. At the heart of the show was an interview with comedy legend Al Murray. It’s an intriguing prospect: take the comic character away from the comedian and will he still be funny? In this case, absolutely. He’s sharp and engaging as he delves into and recreates his early stumbling performances and talks us through the creation of the Pub Landlord. Most revealing is the missing ‘apostrophe S’ – it was meant to be Al Murray’s Pub Landlord, not Al Murray: Pub Landlord, but when his name became synonymous with the character he was stuck. A career shaped by punctuation. Murray was very candid, very plain speaking and, thank goodness, very entertaining. Mat makes a classy, informed interviewer, knowing when to let his guest carry on, and when to intervene. The unusual format of the evening is refreshing and his choices of performers are well balanced. A very pleasing way to spend Thursday night and pretty good value at fifteen quid. Next month sees Paul Daniels in the interviewee’s chair – can’t wait.