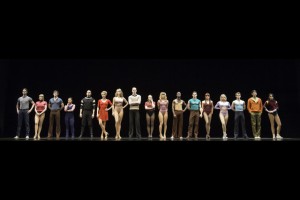 Picture, if you will, me and mum, thirty-something years ago, walking down Schubert Alley in New York, our eyes misty from crying at the show we’d just seen: I’m about nine and it has spoken to me like a musical never has, giving me direct permission to dance around my bedroom like Cyd Charisse, for mum it has given a new, emphatic and honest voice to her profession. We were lucky, we had just seen the second Broadway cast of A Chorus Line, which featured Ann Reinking in the role of Cassie; it was a huge buzzy hit, the must-see show and we could only get standing tickets. So thirty-something years later, this time with centre stalls seats (courtesy of a Facebook competition, many thanks), mum and I returned to A Chorus Line. It’s hard to remember quite how revolutionary it was at the time and how it influenced so much theatre that was to follow. It took its stories from the words of real dancers, at a time when verbatim theatre hadn’t even been invented, it portrayed strong women, confident gay men, ethnic diversity and showed the director as a tyrant; there was no interval (radical) and no proper curtain call (unheard of). The backstage musical had been turned on its head. It challenged perceptions of stardom and showed the desperation of unemployment. At the London Palladium, even though none of these guys were born at the time it was created, we see that dancers are still working just as hard, singing, dancing and acting for two exhausting hours. It feels very close to the original, slick and tight, the score soars and the choreography dazzles again and again. The deceptively simple set brilliantly shows the audience the dancer’s viewpoint and the orchestrations are thunderous. 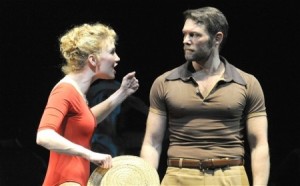 There’s a wonderful feeling of connection as Scarlett Strallen‘s body eases perfectly into Michael Bennett‘s seventies movements and his choreographic voice reaches out across the decades. It’s also interesting how some things feel different: back then Tits and Arse seemed like a empowering song about a woman taking control, now a celebration of the boob-job is somewhat less appealing, the inclusion of gay and ethnic characters feels pretty much the norm and the director’s demanding voice is the staple of reality talent shows. But the piece still resonates, the performers still really need that job and God, we hope they get it. At the end, as their individuality is absorbed back into the anonymity of the glittering finale, mum and I were, once again, deeply moved by this celebration of the energy, skill, strength and tenacity of the dancers on the ‘line’.