Enter the world of Pina Bausch and you find yourself in an alien country where you don’t quite know the language; you must adapt fast to understand… and it is a sharp and barren dialect of angular limbs, aggressive bodies and arch smiles. 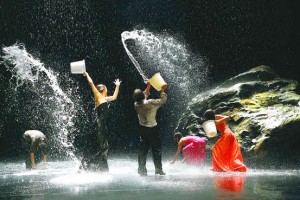 In Vollmond at Sadler’s Wells a series of snappy vignettes lay bare intimate details of often ugly relationships: a man shakes a woman violently, kisses her passionately and she leaps into his arms like a grateful child. A woman commands her man to undo her bra, winking at us as she teaches him to undo it faster. Two men play like children, but they may actually be fighting. A man uses a woman for pistol target practice, but never fires his gun. A be-gowned woman moves like a mannequin as the men control her trajectory. A drowning Ophelia floats gently past. The power constantly shifts, the men forced into submission one moment, the women painfully subservient the next. Occasional longer solos show bodies in conflict with themselves; the movement is discordant and rarely do the dancers move in rhythm. At times the female bodies seem diminutive and vulnerable in their heels and wet evening dresses, at other times imbued with amazonian strength; from Lolita to Medea in a flash. The more casually dressed men strut or serve or slide about and regularly lose their shirts, their torsos proud like stallions, particularly as the watery finale approaches. Hitting the sodden stage together, all hell breaks loose and the men and women finally unite, if only to celebrate the impossibility of a harmonious ending. It was my first Basuch experience and that’s my attempt at translating her elusive language… as challenging as expected, often rewarding and always engaging.

(And Sean Gandini and Kati Ylä-Hokkala will understand my private smile at the brief appearance of an apple!)